The God separated a spirit from Himself and fashioned it into Beauty.

In a letter dated 18 February 1913 to Mary Haskell, his muse and benefactress, Gibran Kahlil Gibran wrote:

One of the dearest dreams of my heart is this—somewhere, somewhen a body of work, say fifty or seventy-five pictures will be hung together in a large city, where the people would see them and perhaps love them.

The most complete collection of Gibran Kahlil Gibran in the world is in Mexico. Among its most important documents are one of the first manuscripts of The Prophet and one of The Madman, as well as those of Sand and Foam and of Jesus the Son of Man, which traveled long odysseys before finding their place in the Mexican collection.

With his refined literary sensibility, Gibran has become the greatest representative of Middle Eastern culture in the West. Essayist, draftsman, novelist, painter, poet, and universal bard of human emotions: sorrow, joy, love, pain, striving, solitude, and nothingness, all essential aspects of life. New readings of his work extend bridges between the wisdom contained in his writings and the premises that continue to motivate new generations.

The maxims of The Prophet underlie a collective unconscious that reflects the universality of Gibran’s thought. The largest collection of his literary and art works—safeguarded for several decades by his godson Kahlil Gibran—is now in the possession of the Fundación Carlos Slim.

The Gibran family disembarked on 17 June 1895 at Ellis Island in New York Bay. Kamileh (aged forty) and her four children—Boutros (twenty), Marianna (nine), Sultana (seven), and Gibran Kahlil (twelve)—had set out from Beirut as a result of the increasingly harsh rule in Lebanon of the Ottoman empire, which dominated the Near East in political, economic, and social terms. They sought to begin a new life in the United States.

Important figures in Boston culture, such as the photographer and publisher Fred Holland Day and the writer Josephine Preston Peabody, guided the artistic career of the young Kahlil Gibran.

Gibran’s work not only expresses his sorrow and nostalgia for Lebanon but also reflects his new life in America. There was the happiness of his family life, the protection of Fred Holland Day, and Gibran’s great loves: his friend and benefactress Mary Haskell, the beautiful writer Josephine Preston Peabody, the pianist Gertrude Barrie, the sensual Micheline, the creative Adele Watson, and the ever devoted Barbara Young, who shared his final years with him.

Anguish for the invaded homeland led to the creation of Pen League (Al-Rabitah al-Qalamiyyah) along with other Lebanese exiles, in collaboration with whom he fostered the rebirth of Arabic literature and the creation of Greater Lebanon in 1920.

Gibran also explored the world of painting and drawing, from his first works, exhibited in Boston in 1904, to the oils executed during his stay in Paris (1908-1910), in which the theme of the man and woman occupied his attention.

The collection in Museo Soumaya. Fundación Carlos Slim, which includes oils, drawings, self-portraits, photographs, sketches, manuscripts, first editions, typescripts from the Alfred A. Knopf publishing house, and personal objects, casts new light on his philosophical thought and literary work. There are also glimpses of the illnesses and deaths of his parents, of his half-brother Boutros and his sister Sultana, and of various friends, as well as of his own, finally, in New York City, from where he returned to Mar Sarkis in Bsharri, Lebanon, the site now of a museum that bears his name.

The work of Gibran is full of wisdom and mysticism. The Prophet, translated into more than forty languages, has been a bedside book for countless readers. With his heart rooted in Lebanon… his voice embraces the world. 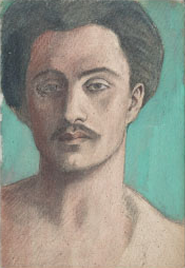